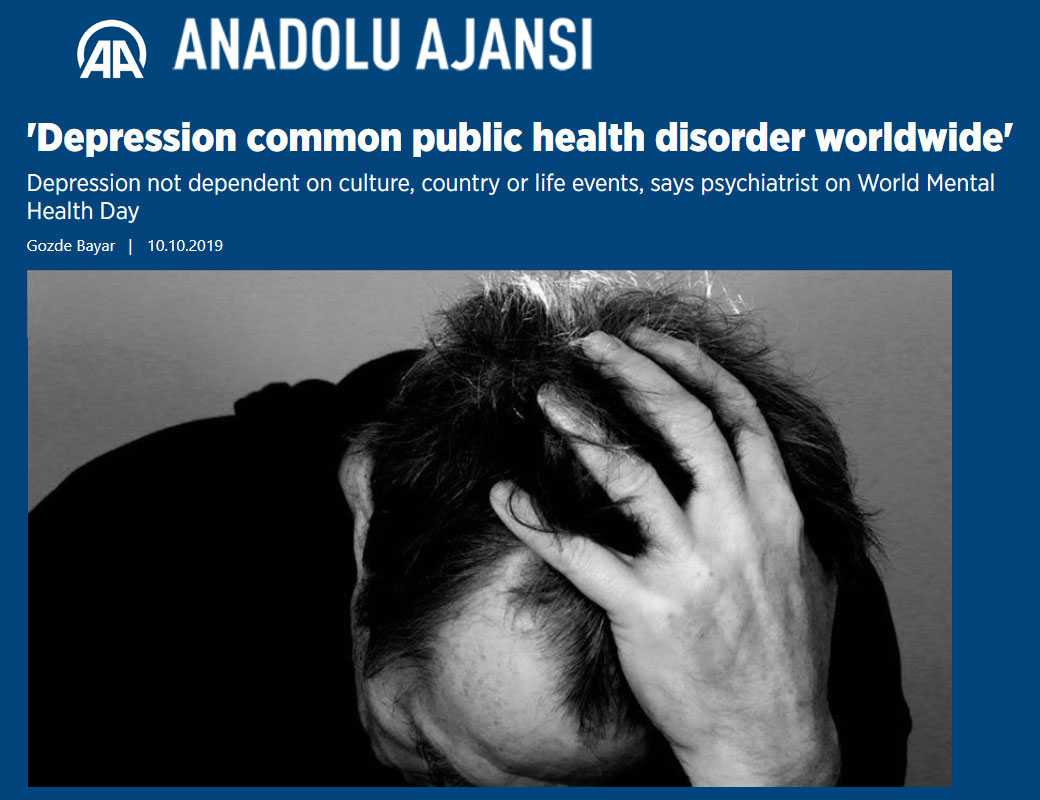 Nearly 800,000 people die every year from suicide, or one person every 40 seconds, according to the World Health Organization (WHO).

It said around 350 million people suffer from depression and 264 million face anxiety disorders.

“Depression isn’t dependent on culture or country or events in a person’s life. It is a public health disease found all over the world,” psychiatrist Umut Isik told Anadolu Agency on the occasion of Oct. 10, World Mental Health Day.

He said one in four women experience depression during in their lifetime, versus one in eight men.

Although suicide attempts are more common among women, attempts resulting in death are higher among men, he said.

Women generally prefer “soft methods” such as overdosing on medication or poisoning themselves while men tend to use more concrete and precise methods, Isik added.

“The suicide rate is high among people who are addicted to drugs and alcohol,” he noted.

Stressing that drug and alcohol addiction also pave the way for suicides, he said alcohol is a major depressive drug that affects the brain with its toxic elements.

Isik said there are various types of suicide, including cultural, conscience, impulsive, altruistic, and collective.

“Cultural” suicides can be observed in some countries where people generally live alone, he said.

“The prevalence of cultural suicides is high in Japan. The rate of marriage and the number of families is low compared to other countries. They work too much and have limited social circles,” he added.

He cited a Japanese engineer who ended his life due to professional failure as an example of a suicide of conscience.

“Impulsive suicides are common among those who suffer from borderline personality disorders. They don’t take any pleasure from life,” he added.

Condemning the trend of murders and suicides being livestreamed, he said they aim to “romanticize” certain kinds of death.

“In some sub-cultures, being too emotional makes the suicide ‘romanticized.’ Suicides on Facebook happen as a way of taking revenge on someone,” he said, adding the suicides are concerned with leaving messages to those they leave behind.

He cited a young boy who committed suicide with a rifle on Facebook live to show it to his girlfriend.

He said treating depression can be a real burden on countries, especially when they cannot provide basic treatment.

It is important to diagnose depression and prevent its recurrence through early response and regular examination, he added.

Marking World Suicide Prevention Day, the WHO stepped up efforts to raise awareness of the scale of suicide around the world.

“Our efforts will continue over the next month,” said the UN agency.

The WHO urged all people to take part in a “40 seconds of action” event to improve awareness and knowledge of what can be done to prevent suicide and let people who are struggling know that they are not alone.

Anadolu Agency website contains only a portion of the news stories offered to subscribers in the AA News Broadcasting System (HAS), and in summarized form. Please contact us for subscription options.